MAG was delighted to welcome the UK Ambassador to Cambodia, Tina Redshaw, during a visit to Ratanakiri this week to see our work clearing the region of the deadly legacy of conflict. 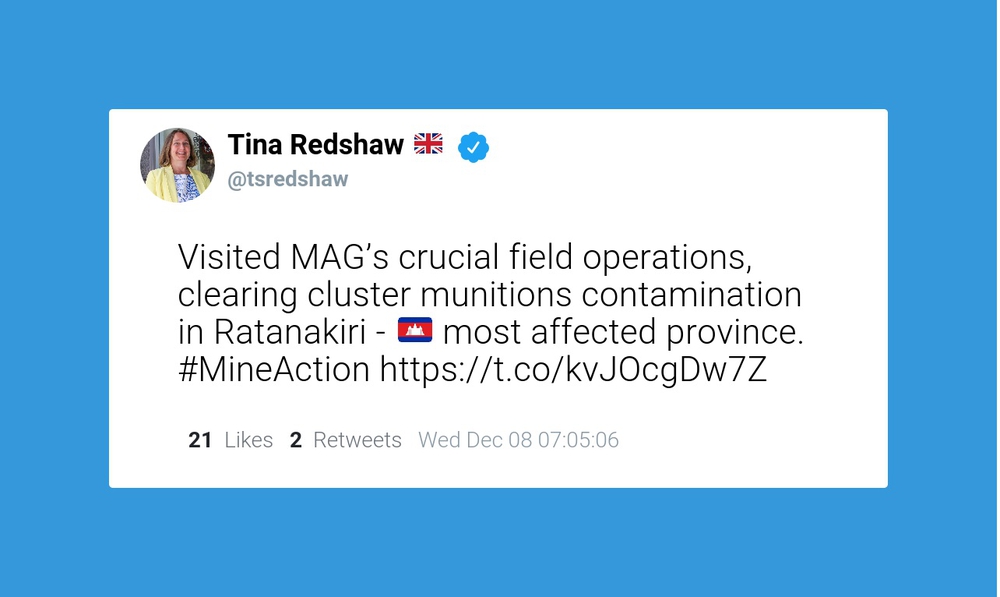 The UK currently holds the presidency of the Convention on Cluster Munitions — the treaty that instituted an international ban on cluster bombs.

Cluster bombs dropped from aircraft or fired from the ground or sea, open up in mid-air to release tens or hundreds of smaller explosive ‘sub-munitions’, over a wide area.

The ones that did not kill on impact have, instead, laid dormant ever since — ready to strike at any moment and trapping communities in fear.

Ratanakiri is one of the regions most heavily contaminated with the unexploded cluster sub-munitions dropped during a conflict that ended decades ago.

Cambodia witnessed heavy bombing during the 1960s and 1970s, with some 26 million cluster sub-munitions dropped on the northern and eastern provinces.

Although the exact figure is not known, researchers believe between 1.9 million and 5.8 million cluster sub-munitions failed to explode on impact.

More than 52 million metres of the largely rural province of Ratanakiri is still suspected to be contaminated by the remnants of cluster munition strikes.

The livelihoods of rural Cambodians are often dependent on agriculture.

Preparing the ground for farming is among the most common cause of casualties, with people accidentally triggering long-buried unexploded bombs.

MAG has been working in Cambodia for almost 30 years to find these unexploded dangers before a child does, in partnership with the Cambodia Mine Action Authority (CMAA) and our donors and by a mixture of manual and mechanical clearance methods, including using mine detection dogs and rats.

On the visit, Mrs Tina Redshaw joined representatives from the Cambodia Mine Action Authority (CMAA) — Secretary-General HE Prum Sophakmongkol and Vice-President HE Ly Thuch — and the Ratanakiri Provincial Governor, HE Provincial Minister, Nhem Sam Eourn.

"We were honoured to have the opportunity to show Ambassador Redshaw  first-hand, the impact of the cluster munition contamination on communities in Ratanakiri and the positive impact of MAG's work clearing this deadly legacy."

"The UK is already a vital supporter of MAG's work clearing landmines across Cambodia, and we hope that — as President of the Convention on Cluster Munitions — the UK will be a leader in building more support for cluster munition clearance in Cambodia and across the world."

Since 1992, MAG has made safe and returned over 97 million square metres of land back to communities, supporting almost 2 million women, girls, men and boys to live free from fear.

But there is still so much to do — a massive 744 kilometres squared of Cambodia is still suspected to be contaminated by unexploded bombs.