MAG is honoured to announce our innovative risk education (EORE) project in Iraq scooped the Best Not-for-Profit Campaign at the Northern Marketing Awards on Tuesday 3 November.

The Northern Marketing Awards celebrate the excellence, creativity and achievements of the marketing industry in the North of England.

The awards are organised by Prolific North, an independent publishing and events company based in the city of Manchester—the home of MAG HQ.

We are delighted to have been recognised by the Prolific North judges in a highly competitive category that saw MAG nominated alongside the Royal College of Nursing, the Washington Community Food Project and Animal Trust.

Last year, MAG launched a pilot project with Facebook and the US government to help people in northern Iraq learn how to stay safe from the landmines and unexploded bombs left behind by ISIS. 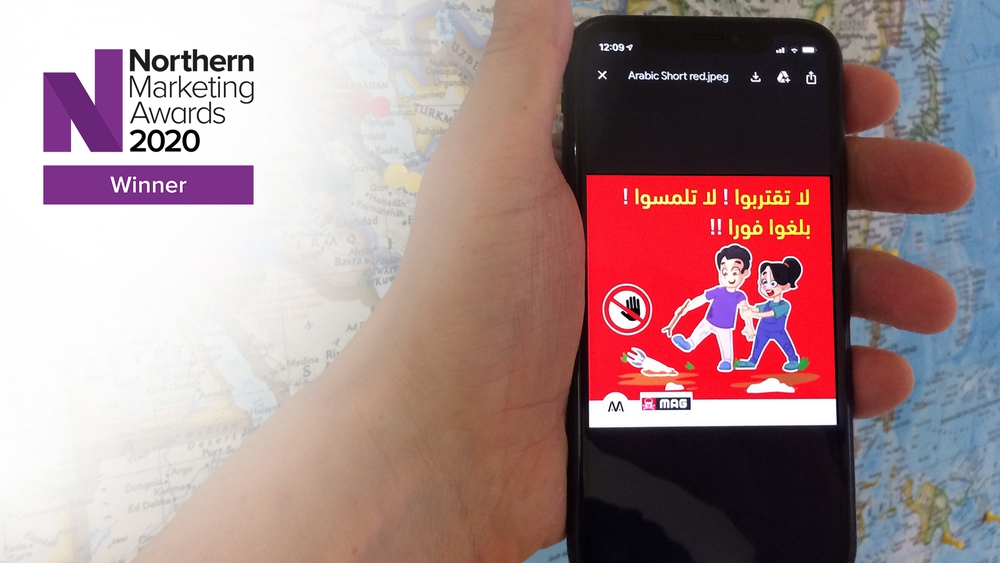 The messages were seen almost 30 million times by 983,447 people in Ninewa. With 94 per cent of people surveyed confirming the graphics had helped them understand the risks posed by explosive hazards.

“As an international organisation headquartered in Manchester, we’re delighted to win this regional award in recognition of our ground-breaking work in Iraq.

"ISIS’s horrifically violent campaign forced more than 1.9 million people from Ninewa Governorate – the highest rate in Iraq – as people fled their homes to escape mass killings, abductions and the complete destruction of cities and villages.

"Our project has helped to reduce the impact of explosive remnants of war by enabling people to understand the risks and find support in case they discover a device.

"Ultimately, through risk education and mine clearance, we hope that our work can help people return home to rebuild their lives and communities and live and work free from fear."

A spokesperson for Facebook said: “Facebook is honoured to play a part in helping reduce landmine casualties in Iraq. With so many now using Facebook around the world, ads are another way to share urgent information with communities who might be at risk.”

Sol Black, Program Manager for Iraq, Lebanon and Yemen Emergency Response at the US State Department said: "This project is a good example of humanitarian actors, technology firms, and governments teaming up to develop innovative and life-saving solutions.  As a result of this project,  approximately one million Iraqis living in areas liberated from ISIS now have information that will help them recognize and report deadly explosive hazards to local authorities.  We are hopeful that this pioneering approach to risk education will save lives and enable Iraqis to return to their homes and rebuild safe from ISIS bombs."

We are hopeful that this pioneering approach to risk education will save lives and enable Iraqis to return to their homes and rebuild safe from ISIS bombs.

Sol BlackProgram Manager for Iraq, Lebanon and Yemen Emergency Response at the US State Department

The winners were announced at a virtual ceremony on 3 November.