In 2018 your support made an incredible difference to the lives of more than 1.4 million women, girls, boys and men. Read on for stories from three women across three continents, all joined by their shared vision for brighter future.

What always stays with me after visiting communities where MAG works is the incredible resilience of people there. This strength is often the result of people’s sheer determination to build a better future for their children.

I am inspired by farmers like Selina, pictured above. Locally-recruited MAG deminers found and destroyed almost 600 landmines from her town in South Sudan and now it’s safe. She told us:

“I never believed that the landmines would be cleared and that we would be harvesting here. We thank MAG for what they have done.”

Selina’s story brings home the immediate impact of landmine clearance and just how crucial this work is. If the land here had not been cleared, her farmland would not – could not – flourish.

Everyone we meet has had a different experience of conflict, many have been through devastating events that most of us can only imagine, but they all talk about what they hope for. Invariably they wish for a better, more peaceful future.

This hope is what MAG was founded on 30 years ago, and it’s what continues to drive everyone with your incredible support today.

Thank you for everything you have done in 2018 to make this vision a reality.

Three stories of strength and hope

Mrs Mukombe’s village brought back to life in Angola

Everyone who gave to our Walk Without Fear appeal has made an incredible difference in 2018!

Forced to move several times during the conflict, Mrs Mukombe (pictured above) eventually sought safety in Luconha village. She knew there were landmines but had no choice, she needed to rebuild her home and be with her daughter and grandchildren.

“It was not easy,” she confessed. “We had a lot of fear. We always told the children to stay in the areas we knew were safe but we worried they would not listen.”

Now Luconha village and neighbouring Lunjacute have been completely cleared of landmines. Everyone who gave to our Walk Without Fear appeal.

The apple orchards of Lebanon

Among the steep, green and luscious orchards of Ain Majdalain in southern Lebanon, Dheyieh – a grandmother and a farmer – is looking ahead to a better future.

While the conflict in Lebanon ended in 2006, it left behind over one million cluster bombs scattered across the south of the country. Every day, Dheyieh (pictured above) was forced to live in fear of these weapons.

“We were aware of the danger, but if we hadn’t taken care of our apple and cherry orchards we wouldn’t be able to raise our children and live properly,” she says.

Now MAG teams have cleared her orchard and Dheyieh’s life has been transformed.

The next generation in Sri Lanka

Sithara  (pictured above with her family) recently celebrated her daughter’s first birthday. More than 10 years after the conflict ended, one-year-old Ayan will grow up in a very different Sri Lanka to her mother.

Sithara’s village in north-eastern Sri Lanka was at the frontline of the 30-year conflict when landmines were buried by both sides. MAG teams found and destroyed landmines found in the soil all along the side of Sithara’s house. Sithara can now look forward to her daughter running, playing and growing up in safety.

“We have planted a cashew tree, five coconut trees and a mango tree,” Sithara says. “There is still some space left so I will plant some tomatoes and chillies.” 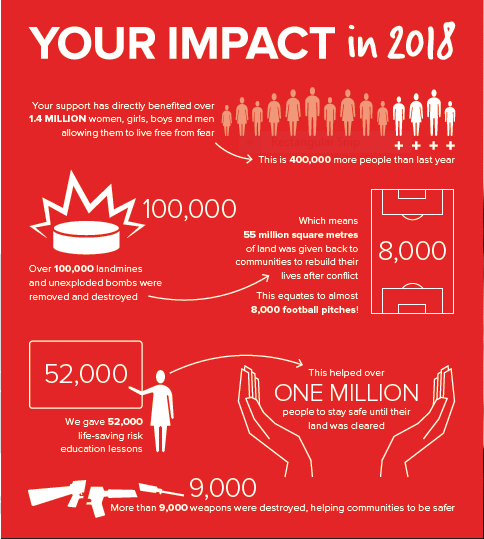 Every landmine and deadly item taken out of the ground is a life saved, an injury prevented, and a community given the opportunity to flourish.

This is what you make possible. Thank you.